SHORT FILM ABOUT THE TRIP

They climbed the Burkli & Keusen 1972 aid line adding new bolts back in June, but ran out of time to complete a free ascent because of mixed weather.

Andy said “I first saw this line in 1999 after climbing the route Agony with The Champ (Simon Nadin), I couldn’t believe no one had tried it, it is a superb piece of rock leading to a needle summit.”

The start is a butch 30 metre 7b+ pulling through a couple of roofs which Twid fired. Andy pulled off the crux second pitch in a ‘skin of the teeth battle’ being filmed by Alistair Lee ofPosing Productions.

“It was un-chalked, very hot, plus the pressure of the camera! I nearly blew it four times. It felt like 8a, but is probably 7c/7c+. I was so happy to reach the belay!”

Two more pitches of 7b lead to the final arête and then the ridge to the summit. Simelistock is part of the Engelhorner cirque – an uncrowded, alpine-verdonesque paradise. 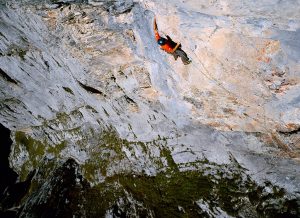 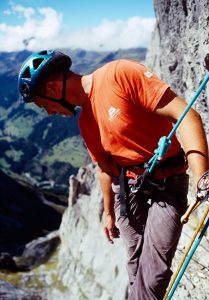